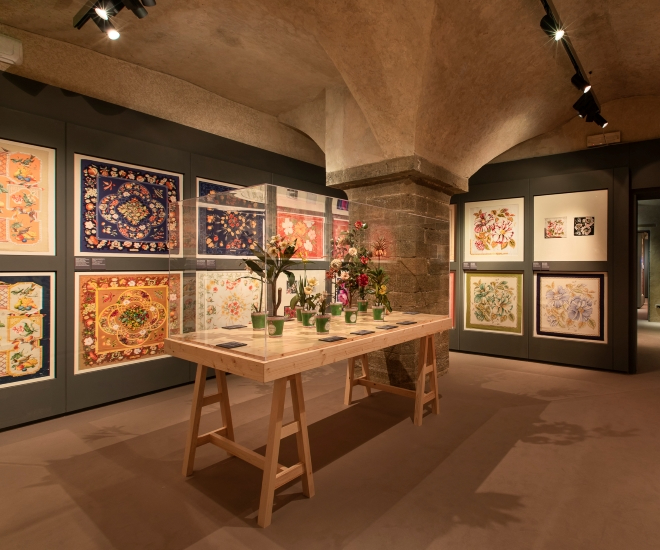 While the name Ferragamo was synonymous with the creation of women’s shoes until 1950, Salvatore Ferragamo, the brand’s founder, wanted to expand their catalogue to include all forms of clothing to dress women from head to toe. However, it wasn’t until the 1970s that this dream was fully realised with the help of his daughter Fulvia Ferragamo who launched continuous production of silk accessories for both men and women. With this new exhibition at the Museo Ferragamo in Florence, Italy, the fashion house traces the origins of silk back to ancient China and the silk road, and its historic relationship with the timeless fabric.

While Fulvia Ferragamo was a student at the Poggio Imperiale school for girls, she stayed in the fabled Chinese Apartment. Its rooms, decorated with watercolours depicting life in ancient China, silk-making and rice cultivation, started her fascination with silk and later came to greatly influence her designs. She was a cultured woman however, and soon drew inspiration from other sources such as ancient books and exotic flora and fauna, which are the most recurring themes in Ferragamo’s range of silk ties and scarves respectively. Through the vibrant exhibition, SILK takes viewers through Fulvia Ferragamo’s mind as they take a look at the fascinating subjects which inspired the elegant silk prints that came to define the Ferragamo name.

In addition, the first part of the exhibition features an installation from Chinese artists Sun Yuan and Peng Yu entitled “Were Creatures Born Celestial?”, exploring the origins of silk and the historically significant Silk Road, where East and West collided and gave birth to a new world of ideological and cultural exchanges and fusion.

Curated by Judith Clark and Stefania Ricci, SILK drew from Salvatore Ferragamo’s vast archives to tell the story of this most luxurious of materials, and the part it played in the brand’s rich and distinguished heritage.

The exhibition will run from 25 March 2021 till 18 April 2022, and even features a virtual exhibit in Italian and English for its global audience. The SILK exhibit can be found on Salvatorre Ferragamo’s website here.

All images courtesy of Salvatore Ferragamo.