Future of the Business World: Cabbage Rolls, Resilience and Our Place As Global Citizens

by admin
in CEO Business Education

On this month’s podcast episode, we meet Jasa Oliver, a junior at Leechburg Area High School In Pennsylvania, U.S. At the start of the war between Russia and Ukraine in February 2022, Jasa felt compelled to do something, anything, to honor her Ukrainian heritage. She and her classmates had been engaging in daily discussions about Ukraine and Russia in her high school’s World Cultures class. Her solution was to create a website “How to Support Ukraine” as a comprehensive hub of 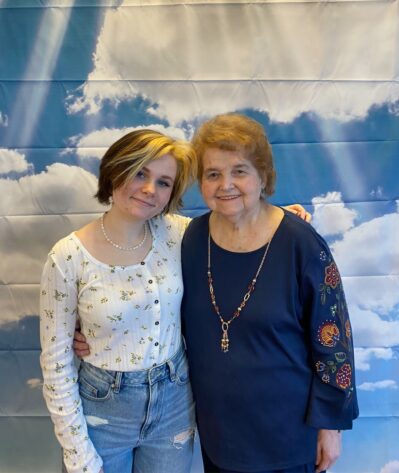 Jasa Oliver and her grandma, Pauline Oliver, whose father settled in Fords City from Ukraine.

Wharton Global Youth: Sometimes the simplest of ideas can have the greatest impact. Can you tell me more about your website, “How to Support Ukraine?” What’s the purpose and what led you to launch it?

Jasa: It launched on February 24th, as you mentioned, the first day that Russia bombed Ukraine. I came home from school and did some of my schoolwork and then just got to it. I knew there was a website that you could make websites with, and I knew that was where I was going to go. I was seeing all these charities being thrown around on Instagram. There’s just so many. I wished there was an area where they were all in one place, easy to access. So, I thought, ‘I can do that.’ And so I did. I collected all these charities. A lot of them came from the Kyiv Independent [an English-language Ukrainian the paper. The front page. I was so excited when I saw that. My mom bought six newspapers because my grandma would want six of them to hand out or to keep.

My grandma has been a big part of this. I don’t get to see her as much since she’s a little farther away. I’ve definitely connected more with her, just making sure she’s okay, supporting her and [letting her] know that the whole family is here for her. Without her, we wouldn’t be these amazing Ukrainians that we are. She’s a talker, so she spread the word [about my website]. She actually goes to Ukrainian Catholic Church in Fords City. There weren’t many Ukrainian Catholic churches around here when her dad first got here, just Roman Catholic because that’s what the majority were. It’s the same thing with my mom’s side, who is Czechoslovakian. There weren’t many Ukrainian Catholic or Slovak churches around here. [My Grandma] took me to a prayer

Wharton Global Youth: What have you discovered about yourself through this process?

Jasa: I learned that I can make a difference. I never thought this website would gain this much traction or this much attention. I never thought I would be on the front page of the newspaper or talking to you right now. I never pictured that in my life. That wasn’t my goal to gain attention or fame for myself but for awareness about the Ukrainian people. That’s what I’m doing talking to you and being in the newspaper. I just never expected someone like me: a 17-year-old from Leechburg that no one probably knows about to make a difference. It just goes to show that you can, no matter where you come from, your background, how old you are, you can definitely make a difference.

Wharton Global Youth: You really see that your voice is powerful. I like to ask each guest on Future of the Business World: If you could change one thing in the world, what would it be?

Jasa: I wish all this hate against people of other ethnicities or races would go away. It’s unrealistic. You can’t have love without hate. It’s a relationship. You’ll always have bad people, but there will always be good people to take those bad people out. I’d also love to get rid of borders. There are so many borders, whether it’s state borders or country borders. My World Cultures teacher [Damian Davies] always says that God didn’t create these borders. We’re all from the same tree of humanity. We’re all human beings. I just wish people could let go of those borders and stereotypes because they’re so constricting and restricting. You wish you could just let go of these borders and these Source link

398 — Ashley Drummonds – From Founder to CEO

How to Build a More Diverse Environmental Movement

How Does Economic Uncertainty Play Out at the Local Level?

Managing Up, Managing Across, and Retaining Your Best Employees